“The only source of knowledge is experience.”

Some bloke called Einstein said that. Basically if you take a look at last season you’ll be half the way there, is what that means in terms of Fantasy Super Rugby.

This has been a little overdue in coming, but we’ll wrap up last season from a fantasy perspective, recap on some of our preseason picks, and start seeing what we think we can read across for what promises to be another great Super Rugby season in 2018.

We made some pre-season predictions for players back in Feb ’17:

Now with these sort of things you’re buggered if you do and you’re buggered if you don’t. Without having much pre-season to base things on, you can either pick a handful of top names and people will rightly point out you’re stating the obvious, or go out on a limb only to most like be proved you’re as good at predicting the Super Rugby Fantasy future as the Sunwolves are playing on tour.

Either way we’ll try to highlight where we whiffed on some of the pre-season picks, or pat ourselves on the back in the below wrap-up. 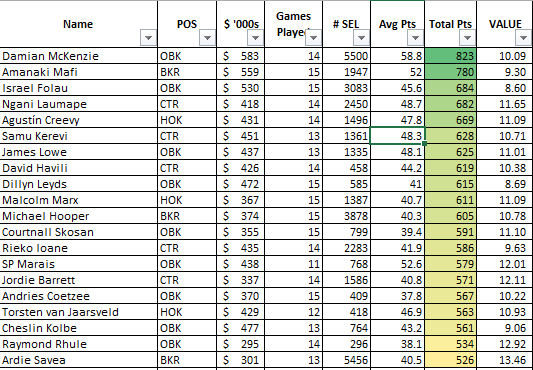 No surprises in who topped the total points in fantasy last year. DMck it the top fantasy pick, and despite throwing himself around with little regard for his midget like frame, he managed to stay injury free and start 14 games – one less than some of his peers.

However, the BIG find for the season was Mafi. Immense. If you were quick enough to recognise his talent early, then you not only got the 2nd highest scoring playing this year, but made a nice little $$$. I don’t think many would have picked  him pre-season, but the first few games he showed his intent in running the ball back in open play, and he stuck to his guns all season. The other couple of Kiwi sensations were Havili; playing behind a dominant Crusader’s team, and Ioane; plenty hyped pre-season (I didn’t buy into that when I wrote the original Kiwi pre-season review, then found myself starting him and his brother Akira in week 1), who came out of the blocks explosively and pretty consistently gobled up points.

Across the Top 20 there’s a host of Fantasy locks Folau (you had to be brave and stick with him though),  Creevy, Kerevi, Lowe, Marx, Hooper, Ardie Savea, TvJ. I think nearly all of these we picked pre-season, and it’s no surprise to see them topping the table.

However, half of the list are a little less fashionable, but would have served you well across the season. Interestingly a lot of them are SA players – Leyds, Skosan, Coetzee, Kolbe, Rhule. Let’s be honest, you’d probably have bigger name Kiwi players in those positions, but few did as well. We’ll hold our hand up, for the SA players, we whiffed on most of those guys (@Bossman did the SA conf, so I’ll blame him).

We then had a 50:50 hit rate on a couple of Hurricanes. Laumape went from a pretty uninspiring, but hard running inside centre in the ’16 season, to a fantasy sensation last year, with people just falling off tackles. I didn’t see that step up from him coming, whilst Bossman took the gamble and it paid off big style. However, we did pick Jordie as a wildcard. He did exceptionally well considering a few games he came off the bench to score and was the second highest scoring Hurricane. 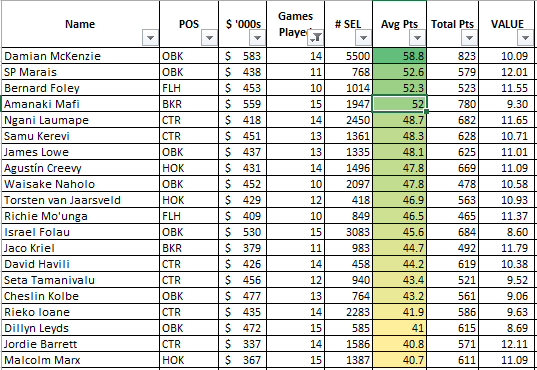 What I personally find more interesting to look at are the highest averaging players. (We’ve removed players that played 5 games or less from this list). This is your gold, because it highlights the guys that might have not played the full stretch, but when fit are points machines. SP Marais is the stand out here, but you’ve also got Naholo who is unplayable when fit, but always misses a few games all season. Most interestingly you’ve got Foley and Mo’Unga. Highest scoring FHs even though they played a lot less games than a Barrett or Jantjies.

Kriel, Marx, Tamanivalu are the other big hitters, who tend to miss a few games, but when they play, beast people.

This is the top 20 that I’m going to work from for the 2018 season, and the players who are going to form the spine of my team will be from this list, across the key positions – HOK – BKR – FLH – CTR – OBK. 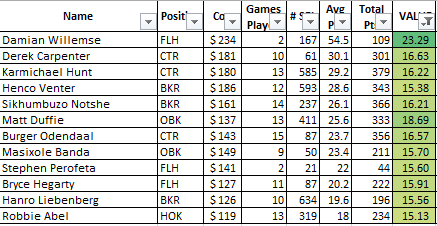 If you read the pre-season strategy guide last season then you’ll know we place a lot of emphasis on VALUE. Basically the points people get for their price, and we highlighted a few steals before the season began as well as a few players who were over-priced for the points we thought they’d get. Again, if we look at last years performance, and current prices, the above list highlights the top 10 under priced / under value players. Obviously with the likes of Willemse / Perfeta only play a couple of games they’re a little misleading, but Carpenter / Hunt / Venter / Duffie / Liebenberg / Abel were all good performers at their positions last season, and could make good squad players again this year, picking up points cheaper than some of their competitors.

Similarly, if we look at the over priced players, those guys who if they get similar points this year, are costing you a lot more for those points, then there’s a few interesting names here. Serfontein averaged 30 pts, which is pretty amazing for him, but he’s priced $20k less than Kerevi, so who in their right mind is going to make that pick.

Smith had a superb season, and Autumn set of internationals (that BaBa’s performance was epic), but is pretty pricey at $476k. There’s 14 players that scored more points than him, most of them at least $150k less. I love the guy, but it’s a risky pick at his current price.

Kepu and Faf De Klerk are the other guys on here who I’d usually have on the short-list for my team, but are just too expensive compared to other options.

The rest of the list is then white noise as far as I’m concerned, as you wouldn’t get anywhere near them week to week.

So What I hear you ask. Well, there’s probably half your team on this page. The safe half of your team, and we’ve picked out some pricey players to avoid, and a few bargains to keep on the bench or fill the last spots. Still, there’s another half the team to pick, and that’s what we’ll be covering over the next couple of weeks with our conference previews.

It doesn’t look like the rules have changed this year, so our pre-season strategy guide from 2017 still holds true in terms of team / squad selection.

If you’re sad like me, and want to play around with player stats in excel, I’ve copied most of the top scoring players into a google sheets here.