Without some top names in Week 5 it was hard going. How did we get on with our transfer picks and line-up.

– Bossman playing is safe by picking players that aren’t playing.

. With exception of big Trev and Gqoboka, the Bulls players were average to poor across the board.

– I said this risky. Pre points update he was on 9 pts, but 42 is perfectly respectable and he popped up another $30k. He’s definitely on the sub out list this week.

– Tight game, which was ok for Highlanders forward, but not great for their backs who were poor overall.

– similarly, Brumbies were poor across the board in a tight game with the only exceptions of Abel and Alcock.

– I mean it makes sense, but whether it was the right thing to do is very dependent on your individual team and who you would have traded in.

– Shocking, Bossman picked Kerevi to hold on to (3rd week in a row) and he was a top 5 pick, despite the Reds having a hard time of it.

– Was ok, but plenty of other higher scoring backrow this week. Kriel was clearly the backrow and Lions pick of the weekk.

– epic miss, miss of the season. The Donald Trump of all misses. Looked awesome. Not entirely sure he was 93 pts awesome, but makes such a difference for the Tahs.

– both were disappointing, and you basically wanted any of the other starting backs.

– Folau was ok, Bosch played well,  but it didn’t translate into points. Horrowitz stole Izzy’s late try that would have put him through the roof.

– despite a medicore 2nd half, Lions did the damage in the first half and these guys performed well. The real test is this week.

– good performances across the board for Whitelock 34 pts, Taylor 49 pts, Crotty 34pts. Samu didn’t start, so if you’d taken Todd 47 pts or Tarfua 40 pts you would have been golden.

– nice debut, hugely disappointing for Stormers fans that he picked up an injury.

– 6th highest scoring FH. Not bad. Should have cashed in 2nd half, but the Lions switched off.

The OBKs were pretty much a push with 6 pts across them. Faf was mediocre with 17 pts. Mapoe didn’t start, but Vorster outscored RJVR, and Kriel 93 pts killed the week, whilst Warren 32 pts had all his runs called back for penalties. Marx was the player not mentioned who had a great week.

Whilst the centres disappointed, everyone else did very well. Pulu 28 pts, Tuipulotu 38 pts and Blake Gibson 34pts did well. But we missed Collins, Duffie, Nanai who were the real Blues winners.

Folau 42 pts and Digby 23 pts were ok, but at their price points there were a number of better options.

Great week for the conservative Bossman. My quantity over quality didn’t really pay-off !

In a low scoring week, with the average somewhere in the mid 400s, our suggested team scored 539 pts pre captain, and 572 pts if you captained RJVR. That’s including for Sanchez not starting. Good values picks across the board, with Kriel, Creevy, Whitelock and Manu really excelling. 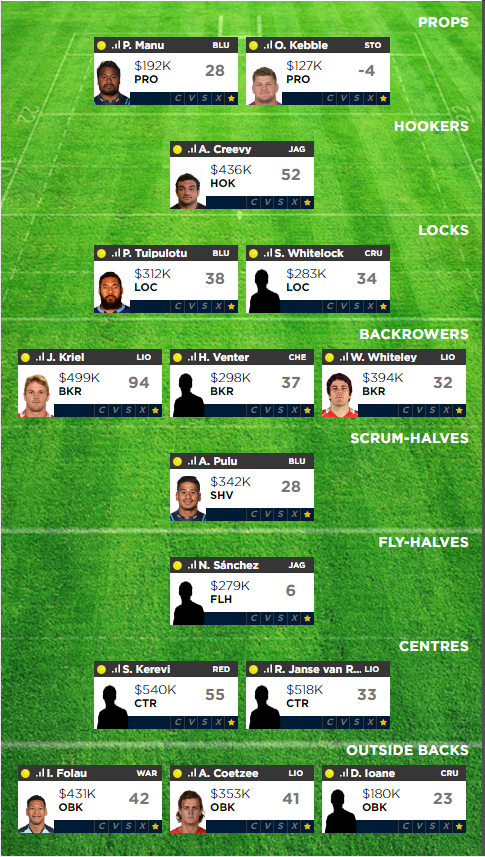